The circumstances of a dependency case will determine when and which type of dependency hearing will take place. The juvenile dependency court is responsible for ensuring the safety and well-being of children that have been, or are at a significant risk of becoming, abused or neglected. The court’s role is to ensure that the rights of children and their family are protected and exercised in accordance with the law. The court also ensures that the government has performed its duties as appropriate under the law and appoints an attorney to represent each parent/guardian and child.

During these hearings the court will consider several issues related to each case. The court may consider information regarding the severity of allegations, the age of the children, police and social worker reports, medical and psychiatric reports, family history, kinship (relatives), and oral arguments from attorneys. Attorneys are appointed by the court for each child and parent/guardian for each case. Testimony may be heard from people such as social worker(s), police officers, parents, family members, doctors, teachers, witnesses, and in some cases by the child(ren).

The following chart illustrates the process and related time-frames of dependency hearings: 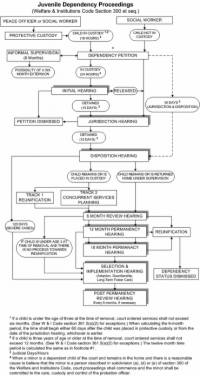 Dependency court hearings are initiated when the social worker from the Children & Family Services Department files a petition with the court. The petition identifies the child(ren) and parent(s) involved with the case, and describes the allegations of abuse or neglect against the child(ren). The court clerk files the petition and assigns the case to a courtroom for an initial hearing. The initial hearing is also called a "detention hearing" if a child has been taken from their home and placed into protective custody.

The following actions occur at the detention hearing

The court also decides if the Social Service’s Agency made a "reasonable effort" to keep the child(ren) with the parents.

At the jurisdictional hearing the court decides if what the petition alleges is true. The court has three ways to do this:

If the court decides the petition is true, it will say what should happen with the child(ren). The judge can:

The court may not let the parent(s)/guardian(s) try family reunification services if:

There are other reasons the court may not order family reunification services and order an alternate permanency plan for the child(ren).

This hearing lets the court see:

If the child(ren) lives with a parent or guardian, the court can:

If the child(ren) does not live at home, the court can

The court can let the family reunification services continue for another six months if there is a good chance that the child(ren) will return to the custody of their parent(s)/guardian(s).

At this hearing, the court decides if the child(ren) will go back to the parent(s)/guardian(s). If not, the judge will cancel family reunification services. The court will have a hearing to decide a permanent plan for the child(ren).

The court may have this hearing to:

At this hearing, the court makes a permanent plan for the child(ren). The plan(s) can:

If parental rights are terminated, the court’s preferred choice for a child’s permanent plan is adoption; with an alternative being legal guardianship. Another option for a permanent plan is a long-term placement, however this is the least likely choice to give the child a permanent home.

This hearing determines if progress is being made to find a permanent home for the child(ren) and if the case can be dismissed. This type of hearing can occur every six months until the case is dismissed.